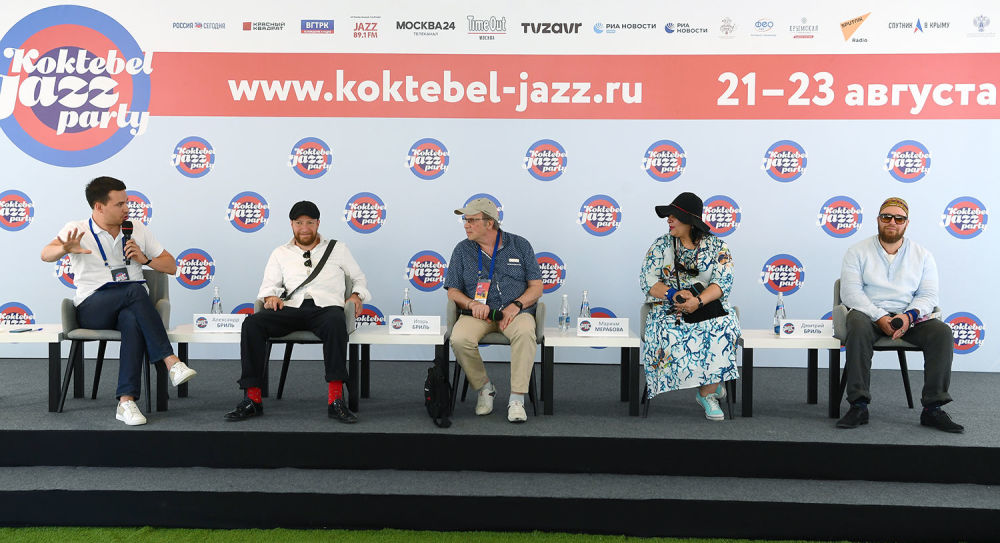 Headliners of the third and final day of the festival, the Bril Brothers, will present a part of a program they are preparing for recording with Igor Butman and Andrei Makarevich, the band members shared. The head of the family, famous musician and pedagogue Igor Brill, will be a special guest at today’s performance.

“I am infinitely happy that the festival did happen. For us it is a chance to meet friends and share with our listeners something beautiful and, probably, to help us in search of ourselves,” he remarked.

According to Bril Senior, 20 years ago he dreamed of taking part in his sons’ band as an honorary guest, and today his dream came true at the Koktebel Jazz Party.

“We did not expect to come here, normally musicians come here only once every five years. And later Sergei Golovnya suggested that we should participate for the third time. This is when we realized that both the festival’s leaders and actually the public like us,” said Alexander Bril, who earlier recorded the voice-over to the audio travel guide for the festival’s venue.

The band’s soloist for today is Mariam Merabova who has known the Bril family for a long time. She calls Igor the godfather of her choosing vocals – they met when her mother brought her to Bril Senior as a pianist, and having the jitters, she decided to defect to a vocals class where she studied with Igor’s sons.

“We preach and promote an instrumental genre and seldom work with singers. But Mariam has become a person with whom we get a huge rush being on the same stage together,” Alexander Bril revealed.

His brother Dmitry continued, “In the 1990s someone suggested they invite Mariam to become a beautiful addition to the all-male band, without even knowing what kind of singing voice she had. Years later former classmates together joined a band, one based on respect and a musicians’ mutual understanding. Mariam Merabova thinks that the core of music lies in blues and folk.

“Jazz is beautiful because of its freedom, due its many different states, when you let this music in, it leads you out to something new. I am especially pleased to be in Koktebel after participating in the Doctor Jazz Party. I take off my hat to doctors and those who were on the forefront of the fight against the coronavirus. Today’s festival is an important moment for our peacemaking mission as it gives people love and awareness,” Mariam underscored.

According to Mariam, the pandemic forced her and many people around the world to stay at home and take a look at how they make a living, and allowing them to spend more time with their families and remember the importance of family values.