Koktebel Jazz Party to improvise in support of doctors 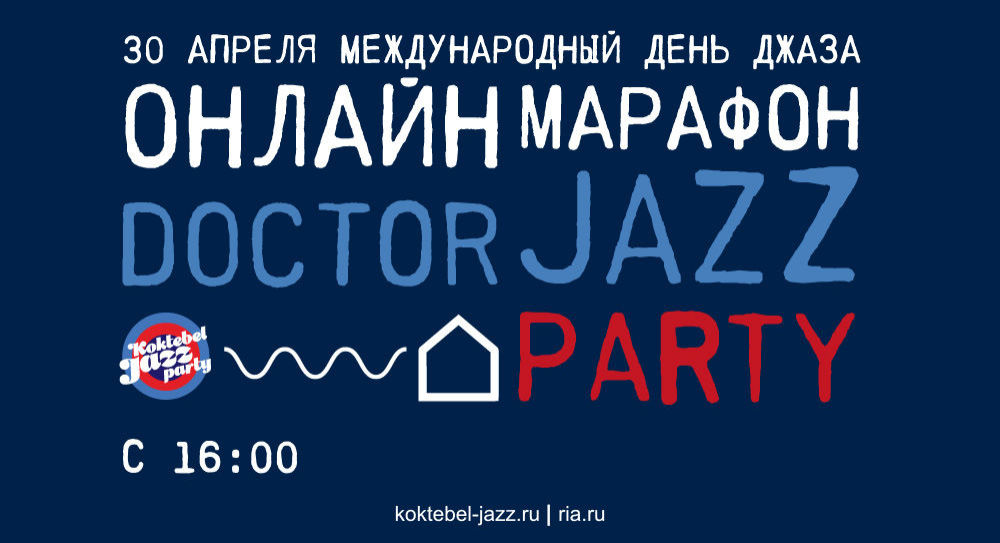 On International Jazz Day, proclaimed by UNESCO on April 30, the Koktebel Jazz Party musical festival will launch Doctor Jazz Party, an online charity marathon. It will support Russian hospitals and their staff, doctors and other medical personnel who are on the frontline of the fight against the pandemic.

The marathon got its name from Doctor Jazz, a 1926 composition by American jazzman Joseph “King” Oliver. One of the lines, “When I’m in trouble bounds are mixed,” embodies the true spirit of jazz, a global force that strengthens understanding and promotes dialogue and mutual aid between people. On April 30, musicians all over the world are going to prove that these are more than just words.

Journalist Dmitry Kiselev, the founder of Koktebel Jazz Party, noted: “Russia stands together with the entire world in this unprecedented battle against the coronavirus. Our festival has always been full of internationally recognized music. Everything we collect during our marathon will be given to doctors who are helping us during this difficult time.”

The online charity marathon will begin at 4 pm Moscow time on April 30 and bring various locations, from improvised stages to home studios, into a single music space. Jazz musicians from Russia and all over the world will take part in the event. The full list of participants is available at koktebel-jazz.ru. The performances will be accompanied by video messages from doctors working at hospitals and medical centers, the frontline of the fight for human lives and health. The marathon will be streamed on the websites and VKontakte pages of ria.ru and Koktebel Jazz Party, as well as at стопкоронавирус.рф.

The online marathon will also have the Jazz at the Speed of Light program, which was first launched at the Koktebel Festival in 2006 and became an inseparable part of the Koktebel Jazz Party. The core idea of the program is to show that jazz erases all borders, uniting jazz musicians in improvization in a single virtual space. The organizers of Doctor Jazz Party will a hold a traditional jam session with St.Petersburg via video to reaffirm jazz as a musical force.

Money to support Russian hospitals and purchase personal protective equipment for medical personnel at regional hospitals and clinics can be transferred with the support of the Zhivoi Charity Foundation, which will be the marathon’s operator. To make a donation, send an SMS message with the text JAZZ and the sum (for example, JAZZ 300) to 3443. Donations are currently being accepted.

All the money raised during Doctor Jazz Party will be transferred to the Zhivoi Foundation’s account for the purchase of personal protective equipment for doctors and medical personnel in Russian regions.

The Koktebel Jazz Party emerged in 2003 as a private initiative of journalist Dmitry Kiselev, the founder of Koktebel jazz festival. A tiny Crimean town gave its name to the festival, which currently is recognized as being among leading jazz festivals of the world. The festival was attended in different years by legendary jazz drummer Jimmy Cobb of the USA, winner of the Latin Grammy Award for Best Latin Jazz Album Gonzalo Rubalcabo of Cuba, bass guitarist and bass player Stanley Clarke, who is famous for his innovative technique, Nu-jazz stars Club Des Belugas of Germany, unique saxophone player Robert Anchipolovsky of Israel, German band De-Phazz from Heidelberg. Vladimir Putin was a guest of the KJP in 2017.

Koktebel Jazz Party is not just world-class jazz, it embodies the true meaning of freedom, and gives rise to a unified vibration of music, the sea, body and soul. MIA Rossiya Segodnya is the organizer of the festival. The Krasny Kvadrat media group is in charge of the festival’s organization. Since 2014, Koktebel Jazz Party has been held with support from the Ministry of Culture of the Russian Federation.