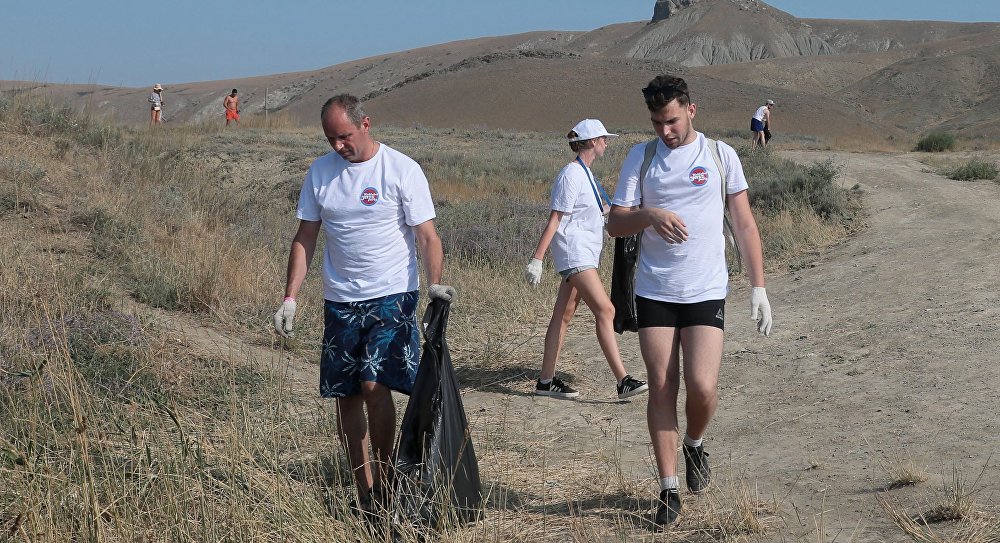 On day two of the Koktebel Jazz Party 2019 international festival, volunteers teamed up with Koktebel residents and visitors to hold a cleanup event at the Tikhaya Bay landscape and recreation park. The event took place in the plogging format, with people picking up litter while jogging.

This is not the first cleanup event held by volunteers and Koktebel Jazz Party organizers at Tikhaya Bay. Participants in last year's event say that the park territory became so much cleaner that is hard to spot litter now.

"I think that our efforts have resulted in making the bay cleaner than it was last year, when we collected a huge amount of litter. Now it is scarce — and this is good, it's the result of our work," Chairman of Koktebel Jazz Party Organizing Committee and Director General of Rossiya Segodnya International Information Agency Dmitry Kiselev said.

Yet, he added, although a positive event, the cleanup should be considered a kind of protest against the slow process of building sewage treatment facilities in the town.

"The overall situation in Koktebel has gotten worse than two years ago, with more people and more waste, while the sewage treatment plant is yet to be built despite the finances allocated from the federal budget. These finances are not being used. On the one hand, we are holding an event that has a positive impact; on the other hand, this can be seen as a protest against this attitude to Crimea and Koktebel," Kiselev noted.

According to him, such environmental campaigns at the Tikhaya Bay set an example for the officials responsible for the condition of Koktebel and all of Crimea.

The event involved over 50 volunteers as well as dozens of local residents and vacationers seeking to make the resort town of Koktebel cleaner.