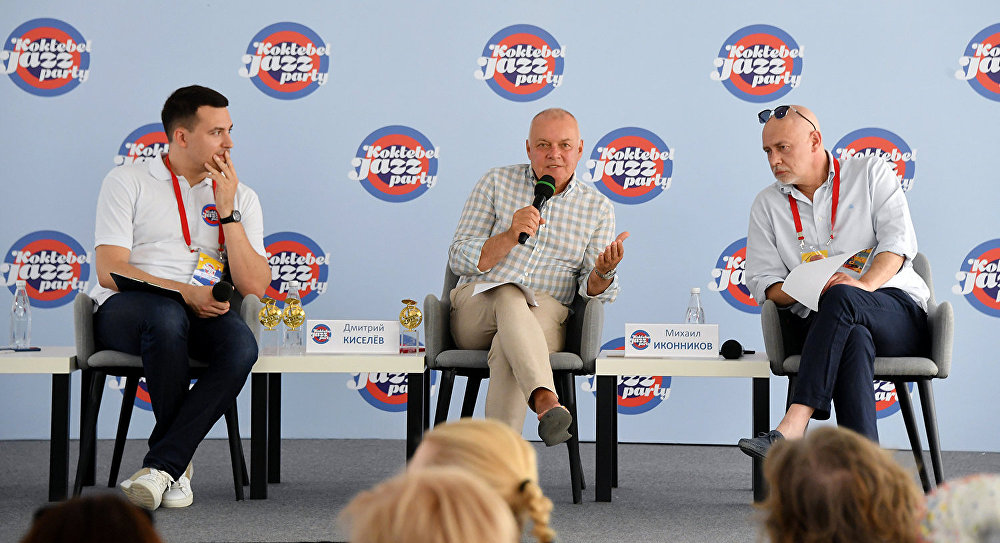 On August 23, the annual Koktebel Jazz Party gets underway in Koktebel. At a news conference, Rossiya Segodnya Director General and founder of Koktebel jazz Dmitry Kiselev together with KJP and Radio JAZZ 89.1 FM Program Director Mikhail Ikonnikov spoke about what's in store for the festival fans this year.

"This is an annual festival, it's the 17th this year. It was founded in 2003 as a small event, but today the scale is quite different: this is the largest jazz festival in the post-Soviet space," Dmitry Kiselev said in his welcoming remarks.

He also noted that KJP was one of the most advanced concert venues in Crimea.

"We have brought dozens of tons of lighting and sound equipment for our remarkable stage which is beautiful both by day and by night," he said.

The festival has already become known as an environmentally friendly occasion, Kiselev added. This year, Koktebel will have a plogging event that combines running with picking up litter.

"There haven't been any garbage facilities here before. We believe that our festival puts Koktebel on the cultural map of the world, and that being unclean is incompatible with the scale of this cultural event. We hold the festival to support the environment in Crimea, in particular in Koktebel, among other things," the Rossiya Segodnya Director General stressed.

He also noted that a cleanup job will be carried out following the festival so that the beach will be left cleaner than it was earlier.

Before this, all the money raised from the festival tickets was given to improve and to equip a local school. However, now the project is completed, and three million rubles raised over the last two years has not been spent yet. This year, it will be 4.5 million rubles.

Kiselev mentioned that the palace of culture had been burnt down in Koktebel in the early summer, which had had children's sections and creative ensembles. If all the formalities are settled with the local administration, the money will be spent to restore it.

Mikhail Ikonnikov, program director of KJP and Radio JAZZ 89.1 FM, the festival's musical partner, spoke about the performances during KJP.

On Saturday, Nils Wülker Band (Germany), Billy's Band and Yulia Chicherina from Russia and famous US singer Sharon Clark will be the headliners. And finally, on the last day of the festival, piano player Daniil Kramer (Russia), Lamuzgueule (France), Yakov Okun's international band and the blues band of popular guitar player Selwyn Birchwood (US) will present their sets on the Main Stage.

Concerts on the Main Stage will start at 7 pm and finish at about midnight. Performances in the dolphinarium will kick off at 2 pm, on the Voloshin Stage at 3 pm, and at 5 pm in the water park.

This year, the festival will be held across five venues: apart from the traditional Main Stage, the Voloshin Stage, Koktebel's water park and the dolphinarium, there will be a new one — the Tavrida-Art Stage.

Koktebel Jazz Party was founded in 2003 as a private initiative by Koktebel jazz pioneer, journalist Dmitry Kiselev. The small Crimean town lent its name to the event which is now on the list of highly acclaimed world jazz festivals. The organizers traditionally keep the celebrity performers' names secret. Over the years, the festival program has included performances by iconic jazz drummer Jimmy Cobb (the US), Grammy Award winner for Best Latin Jazz Album Gonzalo Rubalcaba (Cuba), Nu Jazz stars Club Des Belugas (Germany) and the extraordinary saxophonist Robert Anchipolovsky (Israel). Russian President Vladimir Putin was among the festival guests in 2017.

The organizer of the festival is the Red Square Group. Since 2014, the Ministry of Culture has provided support to the Koktebel Jazz Party. Radio Jazz is the musical partner of the festival.