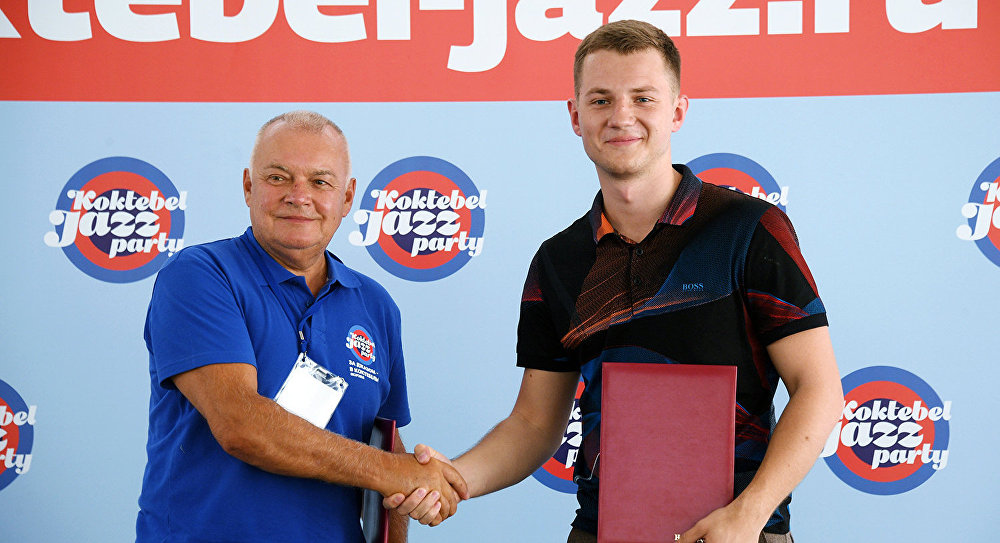 Board Chairman of the Council of the Association of Volunteer Centers Artyom Metelev and Dmitry Kiselev, Director General of the Rossiya Segodnya International Information Agency, signed a partnership agreement between the AVC and the media holding. The signing ceremony was held at the press center of the Koktebel Jazz Party international festival in Crimea.

Under the document, Rossiya Segodnya will act as the general information partner for events held by the association within the Year of Volunteers.

"The work under the agreement we have just signed is in fact also collective volunteering for Rossiya Segodnya. Nobody is forcing us to do this, nobody is providing funding specifically for this project — we are doing it absolutely voluntarily. I think we will gain rich experience of mutual cooperation and I am confident that we will be of advantage to each other and will launch new projects," Dmitry Kiselev stressed.

Artyom Metelev said signing the agreement with the Rossiya Segodnya media holding was a landmark event for the AVC.

"Partnership with the media, especially with Rossiya Segodnya, is crucial for us because the volunteer movement does not develop as fast it could without assistance in promoting the volunteering ideals, without telling narratives of stories and of people who do volunteer work. And we influence the whole sector by talking about the projects in our country, volunteers' activities and the achievements of organizations," he emphasized.

According to the AVC head, the Year of Volunteers announced by the Russian president, represents the contribution by millions of people who find the time to make their country better.

"According to recent data, as many as 36 percent of Russians said that they have experience of volunteer work, and sociologists speak of tens of millions of people who have tried volunteering at least once in their lifetime. Volunteering extends to all areas of public life: there are volunteers in sport, healthcare and in social projects," he said.

Metelev noted that the association has a lot of experience of working with Rossiya Segodnya.

"We have many joint projects, and RIA Novosti was the first agency in the country that made up a special project dedicated to the Year of Volunteers, posting information about our events every day," the head of the AVC recalled.

He also said that at present the association is engaged in several projects with the media holding. In particular, it is the information support of the Russian Volunteer contest, and the agency's successful partnership with the AVC's platform Russian Volunteers.

The system has 200,000 registered users and about 11,000 organizations that produce ongoing content. We have agreed to exchange this positive information, to post the very best to the RIA Novosti news wires, and distribute among the volunteers through our resources the materials published on the agency's sites.

Also, the AVC will hold a number of volunteer events and large-scale forums before the year's end with Rossiya Segodnya as their information partner.

"I am sure that in the coming six months, considering the spirit of cooperation we enjoy with the Rossiya Segodnya team, they will also discover many aspects of volunteer work and the team members will try out volunteering. Among other things, they will be able to uncover their talents as media volunteers. This makes me believe that we have huge potential for cooperation in the future," the AVC head said.

Metelev also pointed out that the agency had set up a media volunteer school, which is currently integrating itself into different events held by the association so that volunteers in the regions could acquire professional experience.

He also expressed gratitude for their support to Rossiya Segodnya Director General Dmitry Kiselev and Yelena Davydova, head of the media group's Year of Volunteers project.