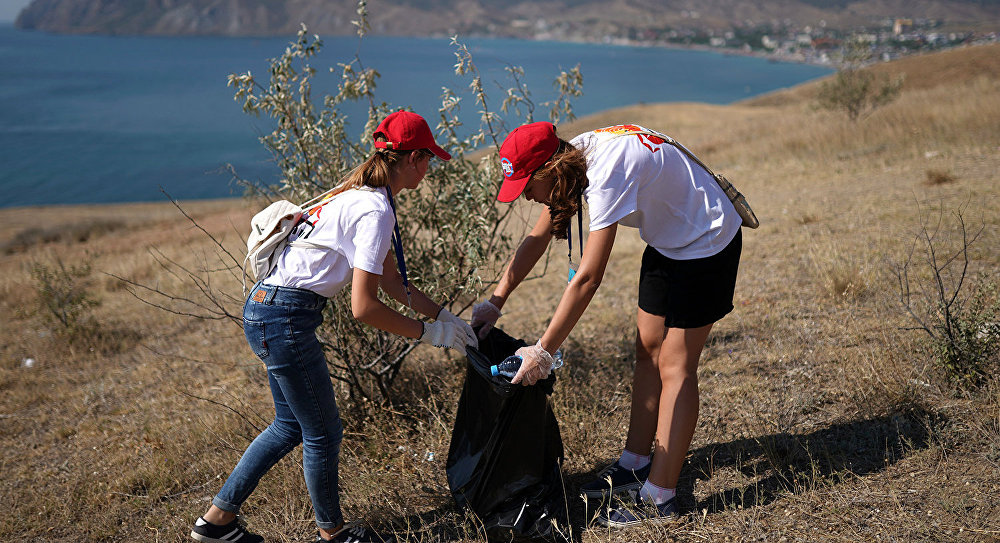 During the Koktebel Jazz Party international jazz festival, its participants and Crimean volunteers carried out a campaign to clean up trash from the roadside leading up to the grave of Maximilian Voloshin and to Tikhaya Bukhta, a highly popular leisure destination both for the locals and tourists. In two hours the campaigners collected a lot of trash, including practically all kinds of solid household waste — glass, plastic, cans, foil, rubber and cardboard.

Compared to last year's event, the Saturday environmental cleanup was much bigger: this year, which is the Year of Volunteers in Russia, the festival's founder, journalist Dmitry Kiselev, Board Chairman of the Association of Volunteer Centers Artyom Metelev, head of the local administration Valentina Prokhorenko along with several administration employees and members of local and federal media joined the event.

The cleanup, which was designed to raise awareness of environmental pollution among the area's residents and visitors, became an important event with a focus on social responsibility. It was held as part of the program of the Year of Volunteers in Russia, which was announced this year by the President, founder of the festival, General Director of the Rossiya Segodnya international news agency Dmitry Kiselev said.

"Tikhaya Bukhta is a unique landscape, one of the most beautiful places on the planet. It was worshipped by poets, writers and artists of the Silver Age. It has a great beach with an amazing view of the Karadag Volcano, the only volcano in Crimea," he said. "As an event featuring remarkable cultural achievements, Koktebel Jazz Party believes it is its duty to promote the development of Koktebel, change its life for the better, including by fostering a responsible attitude towards nature."

Right after the event, Artyom Metelev and Dmitry Kiselev signed a partnership agreement between the Association of Volunteer Centers and Rossiya Segodnya international news agency. The agency will act as an information partner of events held by the association as part of the Year of Volunteers.