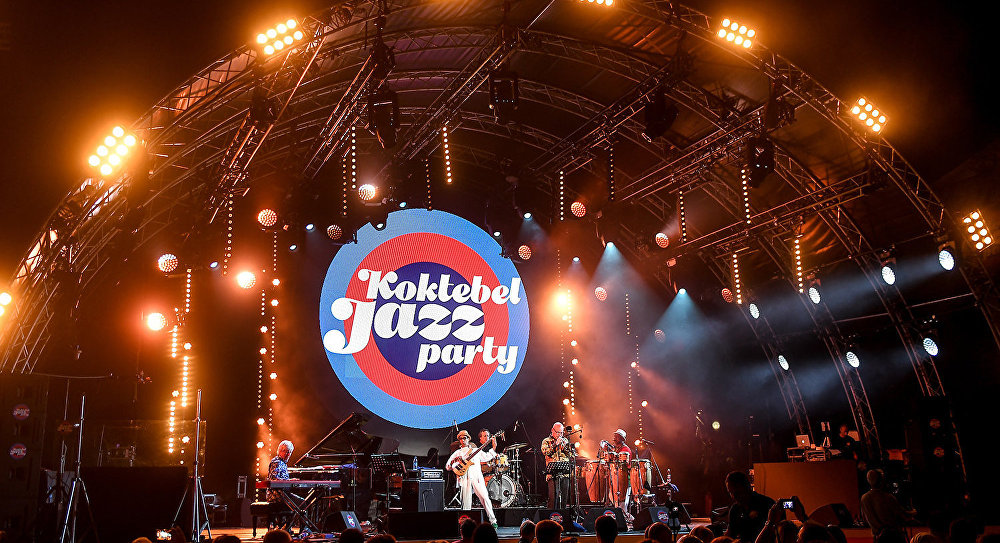 The anniversary jazz season in Koktebel, Crimea ended with a majestic firework display. The international festival, which brought together jazzmen from Germany, the USA, France, Sweden, Switzerland, Brazil, Korea, Russia and other countries at the Black Sea coast, became an important event for jazz fans all around the world.

President Vladimir Putin attended the festival's closing ceremony. He welcomed guests and participants and thanked the festival organizers. He also noted that over 15 years the festival has hosted about 150 top international jazz bands. "Music is a language that needs no translation and unites people," the President noted.

During the closing ceremony, the festival's founder, journalist Dmitry Kiselev, said: "On these days, a unique, most brilliant 15th jazz festival took place. Here in Koktebel we set a high musical standard. I am glad that we have Grammy winners as well as Russian jazzmen here."

Eddie Palmieri, an iconic American piano player, composer and band leader, was the headliner of the last day. "I have 10 Grammy awards, and it will be my highest honor [to win the Crimean festival's prize] — because Crimea is absolutely beautiful and this is a very, very important concert, and we just fell in love with the whole festival. That's all so exciting. And I know I will win the prize," the jazzman said.
The last day of the festival united famous jazz masters on the main stage: musicians from Brazil, Sweden and Russia in the Brazil All Stars jazz band; the Double Bass Project featuring jazz musicians from France, the USA and Russia; and Yakov Okun's international band with American, Japanese and Russian players.

Brazilian drummer Edson da Silva of the Brazil All Stars band noted that since the first time they attended the festival its level has gone up a lot and there have been many improvements. He also said that he liked Russia, liked to play here and to work with Russians.

The last day of the festival also saw the traditional Jazz at the Speed of Light video conference. It united the jazzmen on the Koktebel main stage with musicians in Yerevan.

Earlier, one of the top German jazz bands — Club Des Belugas — performed on the main stage. The band plays nu jazz, which blends jazz elements with other music styles such as funk, soul and electronic music. The public has enjoyed the band's performances since 2014 when it played at the Koktebel Jazz Party festival for the first time. The international jazz team also featured Joe Lastie's New Orleans Sound (USA), which opened the concert on Saturday, and others.

The anniversary jazz season in Koktebel not only brought together world-famous jazz musicians but also gave young jazz players a chance to show their talents. Soloists from the Domisolka children's musical theater, jazz orchestra members of the Children's Art School of the Moscow Department of Culture, and young talented Crimean musicians performed there among others.

Jazz fans from all over the world could follow the festival online in a unique 360° panoramic video format. The concert broadcasts from the Koktebel Jazz Party main stage were available on RIA.ru, the most visited Runet website.

During the festival, photos from social media channels taken at the Koktebel Jazz Party venues were shown on the main stage screen. Everybody who wanted to participate in this flash mob posted photos tagged #KJP2017.

The audience energy was measured with the people's choice award established by the festival's special partner, Smolenskiye Brillianty (Smolensk Diamonds). The winner was chosen by the loudest applause and cheers.