Jazz it up in Koktebel
The Festival 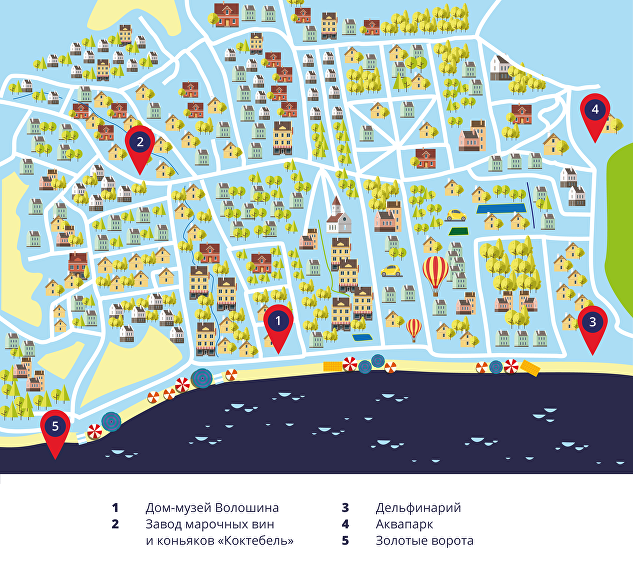 The Voloshin Museum House officially opened its doors to the public on August 1, 1984. It is, perhaps, one of the world's few museums to have preserved so well the period charm along with the original ambience of an artist's home. Inside the house, almost every piece remains exactly where the owner left it a century ago. This is, indeed, amazing for a museum that, like Voloshin's, has been through more than one devastating war. The genuine interior decoration reveals to us his individuality and his distinct worldview.

About 300 items are on display in three of the Voloshin House's rooms. These are photos, personal belongings, autographs, pictures, and books featuring the owner's oeuvre as well as that of his literary inner circle. The museum's book collection has been built around a memorial Voloshin library, featuring some rare editions and a large number of books with autographs and dedications.

The Voloshin Museum House also operates as a community center. It is the venue of regular literary readings and symposia, with the most famous being the international Voloshin September symposium. This is a high-profile event involving a creative writing competition, a festival, a series of open-air painting sessions, the International Voloshin Awards, a science-and-culture conference "Cimmerian topos: Myths and Reality" and youth seminars.

Koktebel's nudist beach is popular with tourists from all over the world. Every summer here culminates in celebrations honoring the Roman god of the sea, Neptune.

Maximilian Voloshin was the one who gave rise to the local nudist movement. He treasured the pristine beauty of Mother Nature and believed that people's inherent beauty was a divine blessing and a gift to celebrate.

The nudist beach stretches along the coastline for some 300 meters — from the foot of Jung Hill to the middle of the Staircase. A dried streambed serves as a symbolic border between this beach and the town's regular beaches.

Folding chairs and parasols are available for rent. The infrastructure also includes WCs, food kiosks and beach-related items, and a café.

Crimea's newest and largest waterpark opened in Koktebel in August 2007 and features enough water rides to suit visitors of every taste and age.

The waterpark has been seamlessly blended into the landscape, tracing the smooth curves of the surrounding heights — Chameleon Cape, Camel Mountain and, of course, the extinct Kara Dag volcano. The waterpark's design recreates the romantic atmosphere of the pirate life. Silver the Parrot is the park's mascot.

The 4.43 hectare park features 7 pools and 24 rides. Twelve of them are children's rides with fairytale themes, while the park's two extreme rides are unlike anything else in Crimea. Shows featuring music and prizes await visitors in the evening.

The waterpark also features five cafes and a restaurant offering European, Japanese and Ukrainian cuisine. There is a guarded parking lot and a comfortable hotel.

The dolphinarium in the resort town of Koktebel has operated without interruption since opening in September 2007. The integrated complex includes open pools and stands that are covered with a dome during winter. The knowledgeable staff has years of experience of working with sea mammals.

From May to October, the dolphinarium features performances by bottlenose dolphins and northern fur seals that are sure to delight children and adults alike.

The Deinotherium Park is one of Kotebel's most unusual sights. Here visitors can see and even touch wildlife without cages, aquariums or terrariums.

The park consists of two spherical pavilions. The first houses a paleontological exhibition featuring animals of the past, including exact replicas of dinosaur bones made by the American Museum of Natural History. The second is home to exotic birds and other animals that can be touched and photographed.

The park also features the world's only sundial-fountain. It has two clock faces: one with Arabic numerals, while the other with Roman numerals show the history of life on Earth, including the different epochs and the species inhabiting the planet at each time.

To the northwest of the town of Kotebel lies the Uzun-Syrt plateau, which means ‘long back' in various Turkic languages. The plateau is the birthplace of Soviet gliding. It is also called Klementyev Mountain in honor of a pilot who died here in a crash while testing a new glider on 11 September 1924.

Uzun-Syrt has aerodynamic conditions unlike anywhere else in Europe. It is 7 kilometer long, 130 meters tall in the south and 80 meters tall in the north. The mountain is located on the border between the steppe and the mountains, and southerly and northerly winds form great updrafts. It is as if nature intentionally created ideal conditions for gliding.

Uzun-Syrt is home to a light aviation training base where anyone can take gliding or hang-gliding lessons, or fly with an instructor.

Kara Dag (translates from Turkic as "black mountain") is an extinct volcano of the Jurassic Period, which was active 120-160 million years ago.  The ecosystem of this unique natural and mineralogical site is home to more than 1,000 kinds of plants, including endemic species.

A biological station set up here by Doctor of Medicine Terenty Vyazemsky (1857-1914) subsequently served as the basis for the Kara Dag Sanctuary. The nature park's 2,874-hectare territory incorporates the mountain belt and the adjacent lagoon.

Kara Dag is interesting to observe both from the sea and from a shoreline walking trail. The picturesque rocky bays are perfect for water sports such as diving.

The Kara Dag Ecosystem Museum is situated outside Koktebel, in the village of Kurortnoye. It was founded shortly after the Kara Dag surveying station had started its operation.

The taxidermy showcased at the museum (birds, mammals, reptiles, amphibians, etc.) give a good idea of what the sanctuary's wildlife is like. Also on display is a collection of local minerals, including some rare examples. Visitors can get to know more about the area's geological history and landscape.

The museum is open to the public all year round.

Cape Chameleon is a land extension jutting out far into the Koktebel Bay. Not only does it resemble the eponymous reptile in shape, but it also manifests similar color-change capabilities. This interesting visual effect is due to the varied reflection of light by the cape's shale layers.

This coastal arch-shaped rock at the foot of Mount Kara Dag is arguably the volcano's most famous and emblematic.

Earlier known as Sheitan Kapu (Devil's Gates), it was believed to serve as a gateway into the Underworld.

The modern-day name alludes to the color of the rock, which is covered with yellow lichen and will take on a reddish hue at sunset.

As legend has it, your most secret dream will come true if you pass through the Golden Gates' arcade on a boat.

The Double-Anchor Bay is situated between Cape St.Elias and Cape Kiik Atlama. The origins of the bay's name remain unknown. According to the most popular of the existing theories, two anchors had to be cast instead of one to make sure a ship did not drift from her stationary position in the treacherous local winds. Another, perhaps more plausible, theory presumes the existence of two anchor marinas in the bay.

The shoreline near Cape Kiik Atlama forms several beaches. The name translates as "a wild goat's leap." If translated from Greek, it means "protruding." Remnants of several Neolithic settlements have been discovered on this cape.

A rotunda atop Mount Koklyuk offers a panoramic view of the town of Koktebel and its spectacular surroundings, including Mounts Kara Dag and Uzun Syrt and the Ameretskaya Valley with its lakes.

A gazebo was built here in 1956 so that tourists could stop over to admire the beauty of the local scenery. The structure is a semi-circular colonnade of about 4 meters tall. Baptized as Besedka Vetrov (Wind Gazebo), it was renamed Zvezdopad Vospominaniy (Reminiscence Starfall) after renovation in 1998.

Barakol stands out among the Crimean Peninsula's few lakes. It goes dry in summer months, turning into reed-covered salt marsh. But during a rainy summer, the level of water in the lake will remain high enough for it to be spotted by visitors.

There is no clarity in the research community about the lake's origins and name. To geologists, the emergence of a lake in this area is a real mystery. According to one of their theories, the vicinity of the dormant volcano suggests Barakol's tectonic origin.

The etymology of the lake's name is also an object of scientific disputes. Many translate it as "a dog's lake," but, according to some researchers involved with Crimean Tatar toponymy, "barak" is a Turkic proper name (a clan's name, perhaps), so the lake may have been called Barakol after a clan that once controlled the area.

Barakol Lake is situated in the middle of the Barakol Valley, near the village of Nanikovo.

The famous Koktebel wine and brandy producer can be found at the foot of Mount Kara Dag, an ancient volcanic rock formation in eastern Crimea. The business opened in 1944 and remains one of the few Crimean vintners that controls the entire production process — growing and crushing its own grapes, aging its wines and brandies in oak barrels, and bottling.

The company boasts one of the largest Madeira production facilities in Europe. Koktebel's famous Madeira wine matures there for 12 months, after which barrels are transported to an open-air court where the wine ages under direct sunlight for three years.

Koktebel's premium wines have a unique taste and aroma due to the varying elevation of its vineyards. With over 30 grape varieties such as Traminer, Shabash, Cabernet Sauvignon, Aligoté and Muscat available from the local vineyards, wine makers have all the necessary ingredients for premium wines.

Koktebel winery and brandy distillery is a modern enterprise with cutting-edge facilities, making over 20 different wines that range from fine dry wines to full-bodied fortified and dessert wines.

The company is also renowned for its brandies, which have been made in Koktebel since the middle of the 20th century with the help of classical methods and the region's distinctive terroir. Spirits age for several years in oak barrels, giving them a noble aroma and a harmonious flavor. Anywhere from 10 to 30 eau-de-vie varieties are blended to produce Koktebel brandy. The company makes seven brandies that differ in terms of production techniques, aroma and taste.